At the age of thirteen she watched her mother die as she held her in her arms.  Her father and an older brother had gone to get help after her mother’s apparent stroke.  Before they had returned this young girl had witnessed the harsh reality of death.  A terrifying experience for one so young and inexperienced.

She loved to sing and while still a teenager left home to travel with my dad and another of her older brothers.  They called themselves the Gospel Troubadors.  They were a young, good looking, musically talented team who all sang and both my dad and uncle preached.  (My dad is the one in the picture smiling and holding the guitar).  This is the cover of a songbook they published with some of their favorite songs. 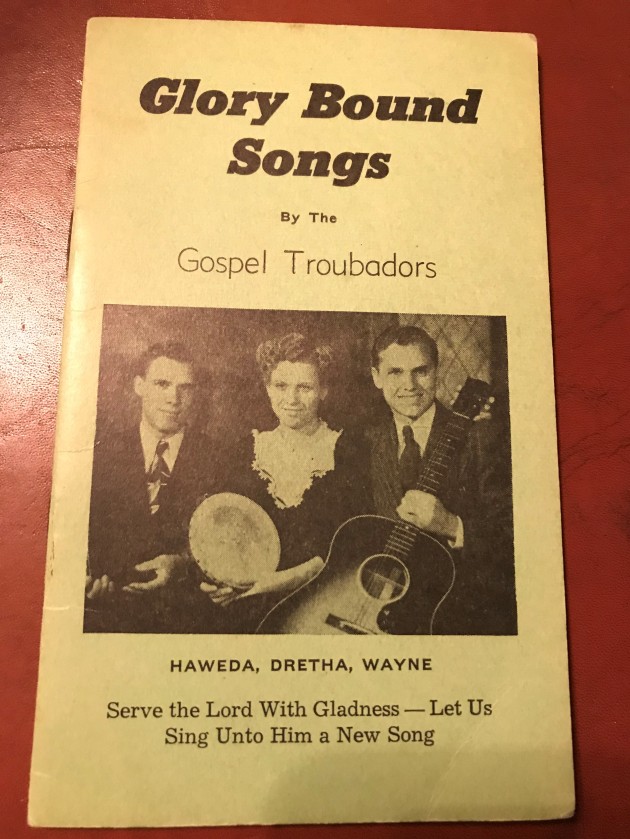 I have never known anyone who loved to sing more than my Aunt Dretha!  She had a raspy blues sounding voice with a touch of black gospel in it.  To me she always sounded a lot like Mahalia Jackson, who is known as “The Queen of Gospel”.

The thing about my aunt though is that she never wanted to just sing for the sake of singing.  She wanted to sing to WORSHIP her God.  She once told me that it bothered her that so many of the younger people focused more on the sound of their voices than they did on the message of their song.  She said, “If they would just forget about themselves and really worship the Lord their singing would make a difference!”  And hers always did.

If she couldn’t live experiencing the spirit of God within her I’m certain she wouldn’t have felt life on this earth worthwhile.

Singing can be a form of worship, of celebration, of entertainment or of lament.  It can also serve as a means of bringing people together in a feeling of unity and communion.  The first recorded song in scripture is when Moses and the Israelites sang to the Lord after their deliverance from the Egyptian army.  This is what they sang, “The Lord is my strength and my song, and he has become my salvation.”  He WAS their song.  He was my Aunt Dretha’s song as well.

In all the years I knew her and all the years I observed her life, I only saw one time when she didn’t want to sing. Our large family had gathered, as we often did, in the basement of another aunt and uncle’s home.  After the traditional taco feast, we would all sing together, sometimes with musical accompaniment and sometimes without.

But this time Aunt Dretha didn’t join in.  A few months before, her beloved Bob, the father of her two beautiful daughters, had been killed in a plane crash.  She was heartbroken.  As everyone sang she just sat and stared.  I remember my dad coaxing her to join in and I vividly remember her saying, “I just can’t.”  As my dad continued to encourage her to sing she looked around the room at all of the happily married couples and with sadness in her voice said, “You all just don’t understand.”

At that moment my dad knelt in front of his sister, took her hands in his, looked her in the eyes and said, “Dretha, you can’t let death or the devil steal your song.  You’ve got to sing.  You’ll be stronger when you do.”  And as she continued to stare at him he pleaded, “Come on.  Sing this next one with us.”  And she did.

Psalm 27:6 says, “Therefore, I will offer in his tabernacle sacrifices of joy; I will sing, yea I will sing praise unto the Lord.”   I know that for my Aunt Dretha that song on that day was a sacrificial offering.  A song of praise when she felt sadness and despair.  An offering to God of her best and finest gift.  A sacrifice from her heart and her lips.  A song of truest love and devotion.

She chose to sing when she didn’t understand.  When the hurt wouldn’t go away.  When the loneliness was at its most intense.  She CHOSE to sing when there was no melody in her heart.  And you know what?  I believe her healing began that day with that very song.  And that with each song she sang her joy and strength increased. Her voice and her spirit were strong the remainder of her days.

She CHOSE to sing when there was no melody in her heart.

My dad was a song writer and wrote dozens of beautiful songs.  He and my Aunt Dretha had recorded several long play albums prior to my dad’s death.  When I received the news last week that at age 87 my Aunt Dretha had unexpectedly died, my first mental picture was of the two of them singing together again.  That thought made my heart smile even in the midst of tears.

All of my growing up years I could hear Mahalia Jackson’s voice coming from the stereo in our living room.  She was one of my dad’s favorites.   Today in honor of both him and his sister I have been listening to Mahalia sing “Move On Up A Little Higher”.

You have moved on up a little higher Aunt Dretha, but for the years you were here, thank you for CHOOSING to sing!  I love you.

16 thoughts on “She Chose to Sing”