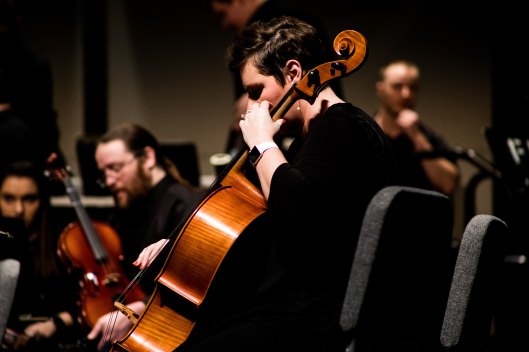 Sleeping at the Symphony originally appeared as my blogging debut.  With Mother’s Day approaching I wanted to share with you this story about my own mom.

It seemed like a good gift for an elderly woman who had everything and needed nothing. So for my mother’s 85th birthday I purchased season tickets to the symphony.

Thinking ahead to winter weather, I chose matinee rather than evening performances and proudly presented my treat of a full season of Sunday afternoons of art and entertainment.

Mom was thrilled. Music had always been important in our home. Other luxuries might be sacrificed but music lessons were considered an essential. In our younger years my sister and I had both played in the school orchestra and I remembered the pride on Mom’s face after each performance. It was almost as though she felt the orchestral grandeur was the direct result of our individual participation. My hope was that I had stumbled upon a great gift idea and when she beamed with pleasure I felt assured I had succeeded.

“This was, perhaps, one of my best gift choices ever,” I thought to myself.

When I picked Mom up for our first outing she was dressed in her finest. As we drove to the theater I told her which composers we would be hearing and any other pertinent information I thought she might find helpful.

After finding our seats, we studied the program and waited for the house lights to dim. When the curtains rose and the startling first few chords broke the silence I looked over to catch a glimpse of her face primed in expectation and utter delight.

My satisfaction over the superb performance was exceeded only perhaps by my pride as an imaginative and clever daughter. “This was, perhaps, one of my best gift choices ever,” I thought to myself. My heart swelled. I always found great pleasure in bringing her joy.

Imagine then my surprise when halfway through the next number I turned to whisper something in her ear and saw that she was sound asleep. Snoring lightly. Deeply in slumber. As the audience applause brought her to wakefulness, I asked if she had found that particular rendition a bit boring.

“Oh not at all,” she replied. “This is just my normal nap time and I was so relaxed from the music I must have dozed off.”

For a while I vacillated from curious to frustrated to downright annoyed.

For the remainder of the season my mother and I continued to attend our matinee performances. And for the full remainder of the season she continued to sleep, often missing a good portion of the entertainment I had paid a decent sum of money to provide. For a while I vacillated from curious to frustrated to downright annoyed. “ After all” , I reasoned, “ why should I spend all this money and go to all this effort just for her to sleep?” But her excitement over going and her gratitude for my taking her never waned.

Eventually I ceased nudging her when she would drift off and I began to hear a different melody than the one being played on stage. I believe it was the sound of my own heart telling me that what my mother loved best was having a few uninterrupted hours nestled next to her firstborn.   Surrounded by beautiful sounds and lovely architecture, she was immersed in pleasure.  And if those hours included a nice afternoon nap then that was alright with me.

2 thoughts on “Sleeping at the Symphony”